I was looking through some Stitchcraft magazines in the Knitting & Crochet guild collection and came across this striking image of disembodied legs walking downstairs. 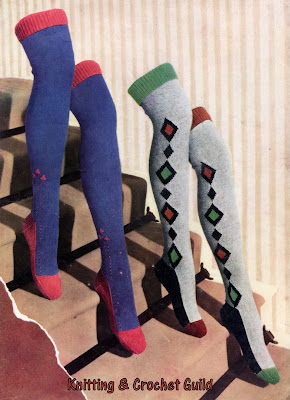 Very surreal.  (The apparent tear in the bottom left corner is actually part of the image.)

Model legs like these are still used in shops selling tights and stockings (e.g. John Lewis) so the only question is how the legs were positioned like that.  It is a very bizarre illustration for a knitting pattern though.

The legs appeared in the January 1941 issue of Stitchcraft, more than a year after the start of World War 2 as far as Britain was concerned.  There were bombing raids against British cities every night that winter, though there is little mention of that in the magazine.  But the bombing must have exacerbated fuel shortages (through damage to gas mains, for instance) so keeping warm must have been difficult. Hence Stitchcraft's pattern for knitted stockings.

The introduction to the the pattern says:


"Who would ever have thought that in the year 1941 we should be wearing good warm woollen stockings? Yet so it is, and what fun they are—as dotty and amusing as can be. Gather up all the bright odds and ends of wool you can lay hands on and set to work. By this time you will have had good practice at turning heels after knitting all those socks for the forces, so you should have no qualms about making a good job of these."

This implies that before the war, women didn't wear woollen stockings.  So what did they wear?  There were silk stockings, but they were expensive and not very warm, I should think, so what did ordinary women for everyday wear in the winter?

Back to the pattern.  The stockings are knitted on two needles, except for the toe, which is knitted in the round and then grafted.  The leg and top of the foot are knitted in one piece, with a seam up the back of the leg.  The heel, sole and toe are in a different colour in the illustration and are knitted afterwards, with a seam along each side of the instep.  The construction means that it would be easy to replace the foot part of the stocking when it wore out.

The diamonds on the legs of the grey stockings are knitted in a combination of intarsia and stranded knitting.  The blue pair have embroidered clocks either side of the ankle.

There are several other knitting patterns in the magazine, including the jacket on the cover.

There are patterns for two "Service Woollies", a sleeveless pullover for a woman, and a polo-neck jumper for a man.


There are a few other 'civilian' knits too, including this pretty jumper in a openwork design. 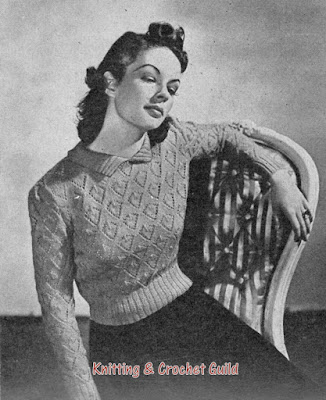 Although Stitchcraft was a Patons & Baldwins magazine, so its main focus was on patterns using P&B wools, it had a cookery page at that time as well.   And in January 1941, the cookery editor addressed air raids directly, giving recipes for fillings for sandwiches to take into the shelter:

Air raids, unpleasant as they are, offer a good opportunity for an enterprising and valiant woman to show the stuff she is made of. For there is no doubt about it that a little light refreshment does help to pass the time while a raid is going on. Some people are spending a considerable time in shelters, and the packing of a provision basket may need a little thought. There is not only one's own family to be considered, for it is surprising how soon one gets to know people in a shelter, and the offer of a sandwich may prove to be the start of a pleasant friendship. Even in the lower regions of your own house, you will find yourself popular if you can produce something unexpected in the food line. Speaking for myself, I try to see that there is always soup ready in the larder, for this is a great restorative when one has gone through a time of strain. In our cellar we have a shelf on which I keep two small saucepans, a spirit stove, bottle of methylated spirit, matches, tin opener, cardboard plates, unbreakable cups, Oxo cubes, Ovaltine, and so on, and it is only a matter of moments to heat soup or milk. We find time goes much more quickly if we have a little meal to take our attention off the sound of planes or bombs. Another tin holds bars of chocolate, and every morning I make a thermos full of coffee, and this we drink, raid or no raid. So here are a few suggestions, some suitable for a picnic meal in an outside shelter, others for use in one's own house. Some good sandwich fillings to start with, as the useful sandwich certainly leads the way in popularity.

It was a terrible time, we shouldn't forget.

There is an edited version of the magazine on the Knitting & Crochet Guild website (only the pages with the knitting patterns - if you'd like to try the liver and parsley sandwich filling, I'm afraid you'll be disappointed).  Guild members can access it by going to Membership, then Pattern Downloads, then Stitchcraft Magazines and Booklets.
Posted by Barbara at 12:54