The first post on this blog appeared on Wednesday 13th January 2010.  Seven years ago.  Isn't that amazing?  I'm amazed, anyway.  I never expected to be still writing blog posts.  The original idea was just to find out something about blogs and blogging by trying it for myself - I'm sure I didn't imagine that I would carry on blogging for so long. 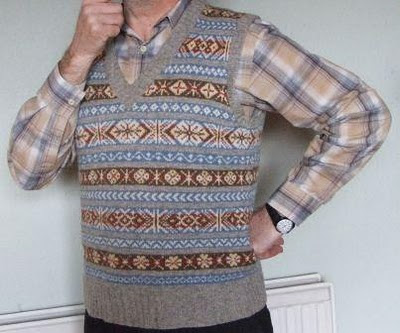 In that first post, I showed this photo of a Fair Isle pullover I knitted for John in the early 80s, before I stopped knitting for a long long time. Since 2010, the pullover has had an exciting time - I lent it to Lydia who used to own Spun in Huddersfield (still open, but with a new owner).  She started to sell Jamieson's Shetland, and wanted some examples of Fair Isle knitting to inspire customers.  I lent her John's pullover, and a sweater from the same book by Sarah Don that I had knitted for myself, and they were on display in the shop for most of a year.  Lydia said that many customers admired them, and several wanted to buy the pullover.  Now we have them both back at home, I think perhaps we ought to start wearing them again....

Back to my anniversary.  Now that I've been writing this blog for seven years, I can see that I have managed to write about 70 posts a year.  It's been quite consistent - the minimum is 66, the maximum 76.  This is despite my best intentions to write more often.  Must try harder, and I'll see how I've done this time next year.
Posted by Barbara at 17:55