Last weekend a group of us from the Knitting & Crochet Guild in Huddersfield had our second knitting weekend in Blackpool.  As last year, we stayed at Paula Chew's Westcliffe Hotel   We ran our own workshops again - this year we looked at three varieties of lace knitting.  On Saturday morning, Marie did a workshop on Orenburg lace, following on from the talk she did in May.  She knitted several samples to illustrate her talk, and the aim was that we should all knit a similar sample in Blackpool.

I soon found that the yarn I had taken with me wasn't suitable, so I bought a skein of Susan Crawford's Fenella in  the shop in the hotel.  The colour is called Columbine, a very pale mauve.  So here's my finished Orenburg sample in Columbine.  (The colour isn't very accurate, I'm afraid.) 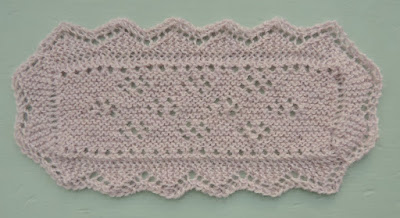 Here's how you knit an Orenburg shawl: you knit a strip of lace as the bottom border first, and then pick stitches along its top edge and the cast on edge.  Then you knit the side borders and the centre at the same time, from side to side.  Then you knit the top border, incorporating one of the centre stitches at the end of every alternate row.  Finally, you join the top border and left edge border with Russian grafting.  (That's a very brief outline...)  Our samples were designed to be like miniature shawls.  In my sample, the cast-on edge is bottom right, and the Russian grafting is at top left, or at least I think it's that way round.  Russian grafting is very neat, and it's hard to see where it is, after you have sewn the ends in.

On Saturday afternoon, we looked at Print o' the Wave, to represent Shetland lace knitting.  I had knitted swatches of several versions, including the one published by Jane Gaugain in 1842, that I wrote about here.  The aim of the workshop was to knit a swatch of a modern version of the pattern.  Everybody managed that, with at least two pattern repeats so that you can see how the design develops.  But I think that no-one attempted the Elaborated Print o' the Wave, from Sharon Miller's Heirloom Knitting. 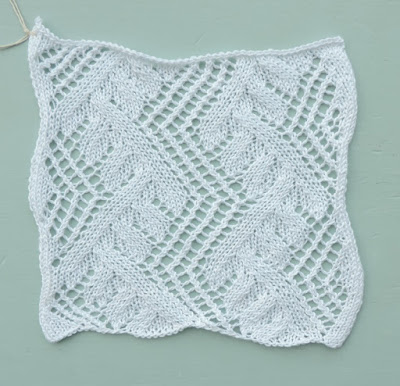 Several people preferred the 'ordinary' Print o' the Wave anyway, and the Elaborated pattern is harder to follow because it has a 36-row repeat rather than a 12-row repeat.  I like both of them.

And finally on Sunday morning, Ann did an Estonian lace workshop.  She gave us a chart for Lilac Leaf Lace, with nupps.  Nupps are a form of bobble common in Estonian lace and quite tricky to do: first you make 7 stitches out of one, and on the next row, purl all 7 together.  Keeping the stitches loose enough to be able to purl them all together is the tricky part, but Ann gave us a demonstration first.  And all sitting together around Paula's dining table was a good way to learn - everyone else was finding it hard, but getting better, so that was really encouraging.  And Val had a very bright idea to keep the stitches loose, which helped a lot.

I did just a small sample - one and a half repeats, which gives two complete lilac leaves.   (I didn't do a border at the sides, so they are not very neat, and I have cropped them.)  I'm still not sure I like nupps much, but at least now I know that I can do them.  And I do have a plan to try them again. 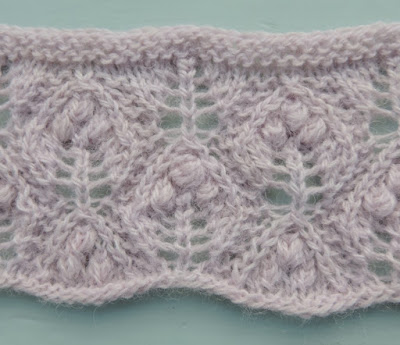 On Sunday afternoon, we came home.  It was a really good weekend - Paula looked after us very well.  She has been running knitting holidays at the Westcliffe for 10 years, very successfully, which is a great achievement - congratulations to Paula.

Just to prove that we were indeed beside the sea, here's a view towards Blackpool Tower and the pier, taken early on Sunday morning from the end of King Edward Avenue. 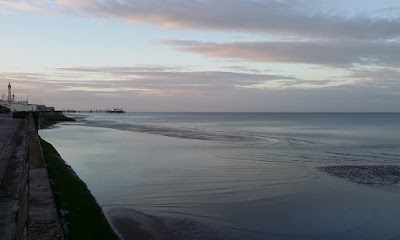