That Day We Sang 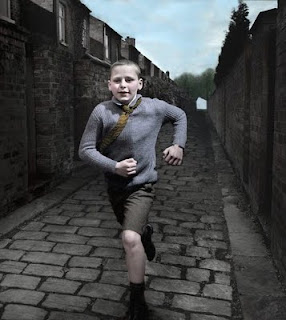 Last week for my birthday treat, we went to see the new musical by Victoria Wood that was running at Manchester Opera House as part of the Manchester Festival.   It is based on the story of the 1929 recording of Purcell's song Nymphs and Shepherds by a Manchester children's choir and the Halle Orchestra. The record was extremely successful and sold a million copies.  J remembers it being played at his primary school in assemblies or music lessons, in the 1950s, and I remember it from the radio, I think.


Victoria Wood says in the programme notes that the idea for the musical came from a documentary about the recording that she saw in the 1970s, featuring interviews with people who had been in the choir in 1929 and were by then middle-aged.   Her musical is set in 1929 and 1969, based around the two main characters meeting at a choir reunion after 40 years,  hearing the record again and remembering how their 10-year-old selves had felt on that day.  They start to ask themselves whether they can together rescue their lives from the mundane routine they have sunk into and live the more joyful life that once seemed possible.  And of course, it is very funny and entertaining.  It is not the 1960s of Mary Quant, Twiggy, mini-skirts and Vidal Sassooon haircuts, but of Berni Inns, The Golden Egg and Wimpy Bars. (The audience were mainly of an age to remember all those things and were very appreciative.)  There is a wonderful song-and-dance routine around dinner at a Berni Inn  (melon and maraschino cherry or prawn cocktail, gammon and pineapple, and of course Black Forest gateau).

The 1929 thread in the musical has a choir of local primary school children, playing the original choir, and an 11 year-old actor playing the younger version of one of the main characters.  He does a fantastic job - it is a big part involving singing, dancing and speaking, and this was his professional debut.  There is a YouTube video showing brief extracts from the opening night, so you can see how well the children did.

And you can also hear the original recording on YouTube. The choir mistress in 1929 trained the children to sing for the recording in "received pronunciation" rather than with their usual Mancunian accents - fortunately today's choir sing with their natural vowels. 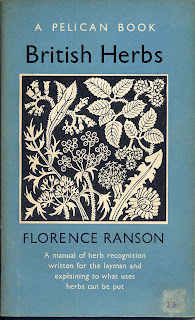 We went to Manchester by train and spent the afternoon there.  J took me to a rather ramshackle secondhand bookshop that he knows, near Piccadilly, where I bought a paperback on British Herbs, published in 1949.  Most of the information is still relevant, but the other things are possibly more interesting.  The author writes about Herb Committees being set up during World War II to collect herbs from the countryside when supplies from abroad were no longer available - for instance, 90 tons of dried nettles were collected in 1942, mostly to use as a green dye in making camouflage material.  She discusses the medicinal uses of herbs, as well as their use in cooking, but sometimes she seems very timid about using strong flavours, especially garlic: "Anyone who travels in Italian buses might be forgiven for deciding never to grow this unpleasantly smelling plant, and one can quite appreciate the decision of the old Greeks that people who ate Garlic should not be allowed in the temples of Cybele."  She goes on to say that it is useful in treating various ailments, but clearly does not expect her readers to want to cook with it. How times have changed - I love the smell of garlic in cooking, and in fact, I am going to make a tomato sauce for pasta right now so that I can enjoy that smell..
Posted by Barbara at 17:58