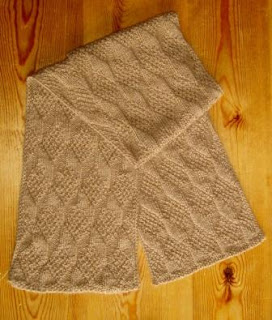 Our friend Mary has  an important birthday today.  She lives in the Highlands of Scotland, several miles from the nearest town (or settlement of any size).  The winters are cold  and long, and so we thought that she would like a warm, soft scarf. I chose alpaca yarn - King Cole Baby Alpaca from my local yarn shop, in double knitting weight.  There is a range of natural colours - brown-ish and grey-ish - and I chose the camel colour.

I have knitted several scarves over the past year, but they have all been lacy patterns with a definite right side and wrong side (and inclined to curl inwards at the sides, because based on stocking stitch).  I had already decided that the next scarf should be reversible - although maybe palindromic is a better (and fancier) word, because I wanted it to be exactly the same on both sides, rather than just equally presentable on both sides.  Plain rib is the same on both sides of course, but (a) it would be boring to knit and (b) the fabric would be too thick - I wanted it to drape nicely. 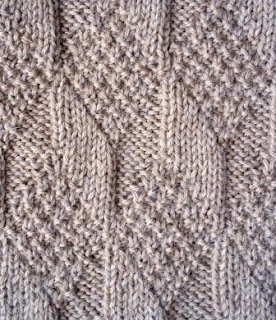 (Moss stitch is the term that the designer uses, and is the American term for it, apparently, whereas what I call moss stitch is what Americans call seed stitch. I don't think I have a name for this stitch. How confusing.)

The pattern is absolutely the same on both sides. And every row  is the same in reverse, if the knit stitches are swapped with the purl stitches. And it's symmetric lengthways too. So the design is cleverly worked out, although the basic elements are simple.  The diamonds of stocking stitch and reverse stocking stitch give the overall pattern a lot of texture and depth, too.

The finished scarf does drape nicely as required, and is very warm and soft.  In fact, we thought that it would be much too warm to wear until the autumn.  But Scotland is getting a lot more snow this week, according to the weather reports. So it will be useful straightaway, if only the post van can get through the snow to deliver it.