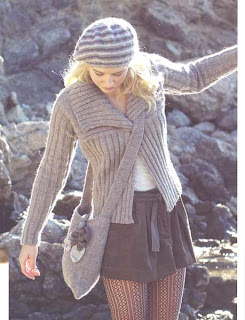 My friend Sarah has a significant birthday this month and I have made a felted shoulder bag for her, from Sirdar Eco wool.   I already had the pattern book for the big cardigan I have been knitting, and I had seen the finished article - someone at my local yarn shop has one.

I have made a couple of changes to the pattern.  The most significant was in knitting the strap:  the pattern calls for garter stitch, but on the bag  I had seen in use the strap had stretched a lot and had to have a 6-inch tuck put into it to compensate.  So I chose a less elastic stitch to try to reduce stretching - I used the stitch that is usually used for sock heels, which is basically stocking stitch but with alternate stitches slipped on the right side row.  I also stitched  on the strap (and flowers) after felting, using sewing thread, to allow any excess to be hidden inside the bag, in case it did stretch after all. (It would be impossible to unstitch the strap if it was sewn on before felting.)  There are supposed to be 3 flowers and 3 leaves in various colours of Eco wool, but I got a bit caried away with knitting flowers, and never got around to leaves.  I used some wool left over from about 30 years ago, that was also in natural sheep-y colours (mid-brown, dark brown and cream). 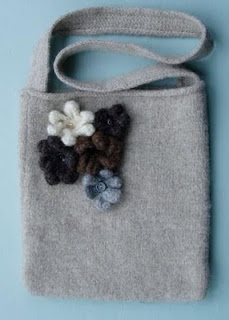 Knitting the bag was straightforward and a bit boring - just a big rectangle for the bag itself and a 4 foot long strip for the strap.  Felting was quite exciting though.  I have never felted anything before (except by accident).  It just needs to be washed at 40 degrees, according to the instructions (though I chose a cotton wash, that does a high speed spin - from past experience with unintentional felting, the spin speed seems to be an important factor).  The result is astonishing - a stretchy piece of stocking stitch comes out as a tough, thick fabric, about two-thirds the size.

The strap was a bit of a problem - because I knitted it in a variant of stocking stitch, it curled up into a tube as I knit it, and felting made that worse.  So I had to open it out sideways and then  thump,  hammer and  iron  it flat.  (The ball band says "DO NOT iron", but I reckon that if you're felting, anything goes.)    It would have been better, with hindsight, to have used a naturally flat stitch, but I think it will be OK.

I followed the example of a similar bag that I found in Ravelry here and gave each  flower a button centre, using odd buttons from my button box.  Sewing on the flowers took a lot longer than it should have  - I didn't like the placement the first time, and I (twice!) had to replace a button that looked black or brown by artificial light but turned out to be blue in daylight. But I think the finished result looks good.  Hope she likes it.
Posted by Barbara at 10:31